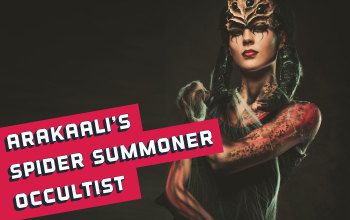 Arakaali's Fang is a very interesting weapon that allows you to summon Spider Minions via its' unique level 1 Raise Spider Skill. This is a level 53 Weapon, and the skill is inherently level 1, but don't make the looks deceive you. This is actually one of the most powerful Minion Spells in the game, and by using The Squire Shield for additional 3 Support Gems that will affect it, it offers absurdly high damage. Spiders Summoned that way will attack enemies with Viper Strike, which has 60% of its' damage converted to Chaos, and a 100% Chance to Poison on Hit, which makes Occultist the best pick for this build, even though it's rarely seen oriented on Minion playstyle.

You might have noticed that Arakaali's Fang will summon Spiders only when you kill something, so this is the trickiest part of this build, as you do not exactly have any damaging abilities to kill higher-level enemies. In order to summon initial Spiders, you will be using The Writhing Jar Flask to create vulnerable and easy-to-kill monsters. With the first Spiders summoned, you will be able to take down enemies quickly, but still, this doesn't allow you to summon additional Spiders, or have new ones spawn when the "old" expire. For that, you will be also using Gravebind Unique Gloves. This pair of Gloves will make any kills made by anyone in radius to count as your own, allowing you to trigger Arakaali's Fang and the Raise Spider skill consistently.

This build is a very straightforward Minion build, where you basically progress through areas occasionally casting supportive spells that boost the damage of your Minions. In this case, you will be channeling Divine Ire linked to Cast while Channelling to trigger Desecrate to create corpses for your Offerings, and Hydrosphere that will massively boost the DPS of your Spiders because of how it interacts to Melee Splash - basically doubling the damage you deal to Bosses if you can afford the Divergent Melee Splash Support. If you are using The Queen's Hunger, Offering skills of all three types will be cast automatically, so you don't have to worry about it. We also recommend using The Ancient Skull Helmet, it will make your Minions much faster and deal more damage. The Helmet has a downside, which prevents the Spiders from "listening to you", so Convocation, Feeding Frenzy, Meat Shield or Signal Prey will not work on them. You are also going to use Molten Shell as the best Guard Skill for high Armour Builds, which can be allocated under your left mouse button, causing it to be cast nearly automatically. You will also use Flame Dash for extra mobility, and depending on your equipment you may need to cast Despair Curse manually (it can be also applied via a Ring affix). All your other spells will be Passive or triggered automatically, which includes various Auras, and a Carrion Golem linked to Cast when Damage Taken.

The only tricky part is to summon your initial Spiders. It's best to start channeling Divine Ire, and while you are at it pop your Writhing Jar Flask at the start of the Map - if you have the first few Spiders ready, you can just rush into Maps without having to worry about them anymore. Treat your Writhing Jar Flask as a standard Hybrid Flask for some Mana/Life Recovery and proceed to monster obliteration.

You will be unable to level up using Arakaali's Spiders, not only because the Weapon itself has a level 53 requirement, but also because it will simply underperform without all the required gear listed in this Guide. There are two ways to level up this character, first one, the faster/easier would be a Cold DoT build based on Creeping Frost and Vortex. You can find a detailed Guide for this build here (unless we have already updated the Guide to the current Patch by the time you are reading it, it's all good, otherwise you shouldn't worry either as the leveling tips will remain most likely the same). This setup offers good damage with solid AoE and requires no specific Items or skill synergies to get you going, but it will require you to fully respec your Passive Tree when you want to switch to Arakaali's Spiders. The other setup involves using Minions: mainly from the Herald of Agony. With similarities in Passive Skills and Support Gems, it may be a more convenient way to play this character during the campaign phase. You will be dealing damage mainly with Crawler of Agony, and build up Virulence stacks via self casting Ball Lightning with increased chance to Poison on Hit and the number of projectiles it fires. Below you will find some basic leveling Skill gems setups and useful Uniques, but if you want to level up your character in an alternative way, just do so and disregard this section.

35 Points Skill Tree
Priorities: Lord of the Dead -> Heart and Soul -> Cruel Preparation -> Enduring Bond (Unholy Might Mastery is extremely important here) and then Quick Recovery and Purity of Flesh

Priorities: Spiritual Aid (if you are increasing the level of your Ball Lightning it will deal some decent damage itself from now on) -> Devotion -> Tireless -> Gravepact

Below you will find all the required equipment needed to play this build. Sadly, this build doesn't offer much flexibility in that regard, and you will be forced to use several specific (and expensive) Uniques to reach this build's full potential. Arakaali's Fang and Gravebind are the two mandatory Uniques, but in order to follow our recommended setup, The Squire, Aul's Uprising, and Queen's Hunder will be also required.