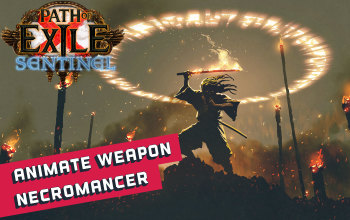 A very powerful, yet underestimated, Minion setup for the Necromancer class

As a Necromancer your playstyle is almost always directed towards summoning Minions and letting them do the work for you. Summoner's playstyle is often unengaging and lacks player agency gameplaywise. This build offers a different, fresh approach to such an issue, as your most prized Minions last less than a minute and have to be re-summoned constantly. Animate Weapon is an often-overlooked skill because of that, it requires you to cast a Bladefall and turn the lingering blades into Minions one by one, which slows you down during mapping. Around 17 of them can be summoned at one time. Their performance will be enhanced by many utility tools which Necromancers usually use for such Physical Damage Minion builds. In this instance, all the damage will be converted to Chaos, which results in better damage output, not to mention the additional Poison Damage.

It's a rather niche build that follows the same principles as many others of its kind. We've decided to make it an Energy Shield variant with Chaos Inoculation for full Chaos Immunity. It's capable of reaching up to 8k or more Energy Shield, over 50k Armour, Divine Shield Keystone, and a small Block Chance. It's not a particularly tanky build, but it can be rated as an above-average one. By summing a Minion from Lingering Blades you don't have to worry about equipping your summons with a weapon, the blades have fixed flat damage based on the Gem's level. The damage doesn't stray far from that of a standard Minion Builds of a similar purpose. This one can be valued high by the players who enjoy an off-meta archetype for one of the best-performing ascendancies in the game.

Animated Weapons are the main source of damage, these Minions are much faster than your character so mapping is usually a smooth process. To Summon them use Lingering Blades from Bladefall. To support them in the way wielding the best results is to summon additional Minions such as Animated Guardian, Carrion Golem, and Spectres. We've used monkey Chieftains to generate Charges of all kinds and Undying Evangelist for Proximity Shield. Flesh Offering is the best Offering to pick for offensive purposes, it increases Attack and Movement Speed for you and your summons. This build uses a lot of Auras - Precision, Vitality, Clarity, Defiance Banner, Determination, Discipline, and Envy. Envy cons from a unique item and grant your Minions additional flat Chaos Damage. Use Flame Dash for a movement Spell and Molten Shell as Guard Spell.

We recommend leveling with Absolution. It's a Spell that summons Minions on kill, most of the Necromancers use it now and it's a well-established way to quickly level up. It doesn't require any Unique or Specific Items. You can transition to Animate Weapon later in the game after you will be able to specialize more in the playstyle this skill offers. We recommend switching after acquiring Triad Grip with four white sockets - this item will be required later on in the build. Your Items should increase your minion's damage as well as that of your own Lightning Spell Damage, as you will have to kill with Absolution. You should also use other Minions such as Spectres and Carrion Golem.

The build requires you to convert your Minions' Physical Damage into Chaos Damage. The easiest way to do so is by equipping Triad Grip Gloves with four White Sockets. A great way to increase your Minion's Chaos Damage is then to equip United in Dream Sword, it grants you the Envy Skill and makes your Minions much more resilient. Besides Unique Jewels, we've also used Whakatutuki o Matua Unique Shield and Ancient Skull Unique Helmet. Your Body Armour, Boots, and Jewelry can be all Rare Items. Prioritize stats such as Energy Shield, Elemental Resistances, Armour, and enough Attributes for your other Items and Gems. You can use up to two Large Cluster Jewels in this build.