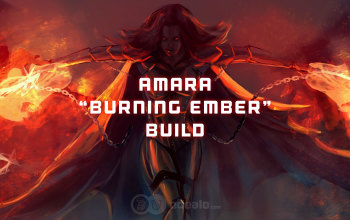 This is one of the most interesting Amara builds based on spreading Incendiary Damage and other Status Effects. Amara's Fist of the Elements Tree grants very high bonuses to Elemental Damage and makes your Status Effects spread like crazy to nearby enemies. Whenever you apply a Status Effect to your target, it has a 40% chance to spread to nearby enemies, and another 35% to Melt, Ignite, or Electrocute that enemy. You also get an extra chance for your bullets to Ricochet to nearby enemies, and when you kill enemies they explode dealing Elemental Damage. All this makes up for one of the most enjoyable playstyles, and DoT numbers are floating all over your screen, melting your enemies.

Below you will find the recommended Passive for "The Burning Ember" Amara Build. Fist of the Elements is the core Tree utilized in this build, which grants very high bonuses to Elemental Damage and Status Effects. This is the one that you should prioritize first, and after you complete it, grab the defensive Passives from the Brawl Tree which will be quite important on Mayhem+ difficulty level.

This build is primarily based on Incendiary Damage, so obviously you will want to focus on Weapons with that particular type. There are several very powerful Fire-damage Weapons that are recommended, however, this build will work just fine with any Elemental Weapon you manage to find. Also, an anointed Weapon which increases your Skill Effect Damage and Chance for a short duration after using Action Skill is highly advised.