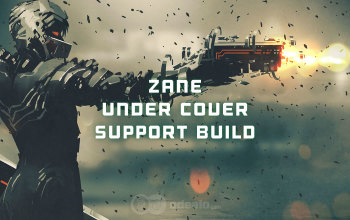 Under Cover Zane the Best Support Build for Borderlands 3

This is currently the best Support Build for Borderlands which is based on Zane's Barrier Shield which blocks incoming projectiles and increases the Gun Damage of all allies inside significantly. The Barrier also grants your active Shield's bonuses to all allies, however, makes it have a slightly reduced the effect on Zane. The Solo capabilities when playing this build are greatly limited as it's mainly focused on assisting teammates with the Barrier and by Freezing enemies rapidly. Since we don't benefit from any Gun Damage bonuses, we have decided to pick Duct Tape Mod and Fractal Frags so that you throw extra "free" Grenades for some additional damage. This build offers currently the highest team bonuses out of all the available characters and has insane Crowd-Control via several sources of Cryo Damage.

Below you will find the recommended Passive for the Under Cover Support Zane build. This is heavily Oriented on the Under Cover Tree which provides the Barrier Skill and numerous bonuses to it. It also enhances Zane's defensive capabilities. We have also decided to use the Didi-Clone from the Doubled Agent Tree, which grants some extra damage with the Passive chance to throw free Grenades and additional Cold Nova for extra Freeze.

This build primarily utilizes Cryo Weapons, and what weapons you choose is up to you. Since we have a Chance to slow down enemies with each bullet, it's recommended to use Weapons with high Fire Rate, but that's not mandatory. Your primary goal should be to get the best possible Shield, as its' bonuses are shared across your party. Also picking up powerful Grenades will be a good idea since they make up for quite a big portion of your total DPS.