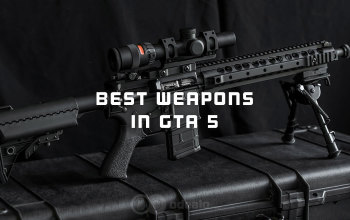 The Best Weapons in GTA Online

Gunplay is one of the best features of GTA Online; 93 separate weapons provide a lot of diversity and easy-to-handle arcade shooting model ensures that firefights are fun and engaging. However, 93 is a large number and some players might get confused while selecting their weapon loadout and end up handicapping themselves by accident. Knowledge is power, and knowing which weapon will be right in a given situation will give any player a considerable advantage over the ones who just use a single weapon all the time. This is why we have decided to make a shortlist of the strongest and the most useful armaments in GTA Online. We hope that, with the help of our list, you will be able to adjust your weapon loadout to any given mission and discover what statistics/traits make a gun stronger than its counterparts which will help you determine weapons that suit your playstyle the most.

Note: Many weapons featured in the game can be customized with various Attachments that modify its performance (for example, suppressor lowers recoil at the price of lowered damage per shot and extended magazine increases weapon's ammunition capacity). This means that you can modify your guns to your liking and playstyle; take advantage of it. Here is a quick list of Attachments available in the game:

Important Note: Weapons featured on our list are not arranged from worst to best or vice versa, but by the type instead. This is because we didn't want to make another arbitrary tier list but rather point you towards the best tool for a given job/situation.

Pictures used in this article are the intellectual property of the Rockstar Games.