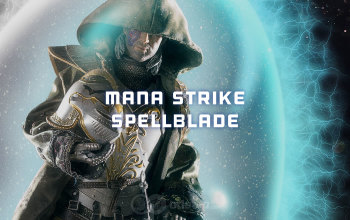 Spellblade is one of the most interesting Mage's Master Class. Instead of casting spells to deal damage, Spellblade utilizes magic to empower his melee and ranged attacks, and grant defensive bonuses. This build is based on the Mana Strike attack, which thanks to Teleporting Strikes Passive becomes a ranged skill. At the same time, it has insane damage scaling potential by adding high additional Lightning damage, based on your maximum Mana. Mana Strike also has a very high Attack Speed, which makes it easy to generate Ward quickly and build up stacks for Blade Weaver, which greatly increase the DPS of your Flame Reave that's used at maximum stacks for maximum damage.

On the other hand, this is a hybrid build that relies on both Life and Ward to stay alive. Ward is generated very fast by Mana Strike, Teleport, and Flame Ward.