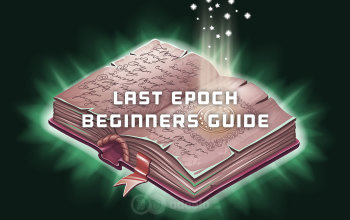 Last Epoch Beginners Guide
Dive into the world of Eterra

The Hack'n'Slash game market is currently dominated by the Path of Exile and, to a lesser extent, Diablo 3. These well known and proven franchises have shaped the H'n'S genre by introducing and refining, now widely used, solutions and in-game features (like randomized loot, upgradable skills, varied difficulty levels, distinct classes, item rarities, seasons, challenges, ladders... the list goes on and on). The Hack'n'Slash system is so refined these days, that new games struggle to introduce new refreshing features and gameplay improvements.

Eleventh Hour Games, the developers behind the Last Epoch, have picked up the gauntlet and are preparing a new Hack'n'Slash Action RPG that aims to shake, refine, and maybe even redefine the genre with the combination of unique, well known, proven, and loved features. In this guide, we will do our best to introduce you to the new exciting world of Eterra in which the Last Epoch is set. We will also describe Last Epoch's gameplay features and systems (Talents, skill trees, and more) in detail to draw a bigger picture of how the upcoming game currently looks like, and what to expect in the near future.

Important Note:  Please remember that Last Epoch is still in development, and all information featured in this Guide is subject to change. We promise you to keep this Guide up to date with all new information that becomes available as the time passes.

Player Character's skills are what defines the in-game experience in the Last Epoch. All available Classes will have access to several unique, powerful, and accordingly flashy (everybody likes fireworks, right?) skills. Every single one of these skills will be customizable in various satisfying ways, which will enable Players to craft and modify their favorite Classes to suit their playstyles and needs.

Note:  Action bar will be limited to a maximum of 5 skills. This will ensure that every single one of the slotted skills will be build-defining, and the ability selection will be an important part of building a Character. This seemingly limiting decision will ensure a bigger build diversity, provide players with engaging character-building experience, force experimentation, and create a lot of space for tinkering and finetuning.

Each of Last Epoch's 5 Base Classes will have access to its three unique Mastery Trees. 1 Mastery Point will be awarded per level, starting from level 3. These points will be used by Players to unlock passive benefits present on the Mastery Trees, and at certain thresholds will also grant access to new Tree-specific skills.

Once Player spends enough Mastery Points into a single Mastery Tree, he will have the option of spending a point on that Tree's Locknode. Doing so will allow him to allocate points further down the Tree and cement His alignment to that Mastery branch, transforming His character into the Mastery Class corresponding with the chosen Tree branch.

Note: Only one Mastery Class can be unlocked per character.

Last Epoch's Crafting System will allow Players to modify most of the available in-game Equipment items by removing, changing or adding their Affix Shards*. Crafting requires an item that Player wants to modify, a special crafting item** in the modifier slot and an optional item in the support slot. Currently, there are three types of Crafting Items:

*Affix Shards are Modifiers present on the magic Items. These Affixes can be added to most Equipment items (except Uniques and Set pieces). Each Affix can modify one or more stats. Affixes that modify more than one stat are known as hybrid affixes.

**Crafting Items can be gathered in-game as loot from enemies and will be indicated by an orange text when dropped in the world. Picked up Crafting Items end up in Player's regular inventory, however, Player will have an option to move them to a special Crafting Storage Space with the unlimited storage capacity by Right-Clicking them in regular inventory.

Last Epoch's Crafting System has some specific mechanic and follows a set of rules: