0.00 Credits are the medium of exchange on Odealo.com
Credits have a fixed 1:1 exchange rate with US dollars (1 Credit = 1 USD) (Click on the icon to view details)
close 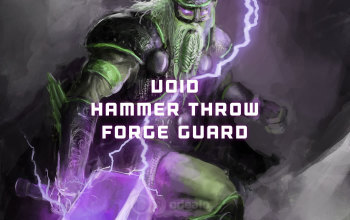 Our Void Hammer Throw Forge Guard build bears resemblance to the popular Hammerdin build from Diablo 2 which most of older aRPG fans should be familiar with. It's a unique melee build which creates plenty of Hammer that orbits around you dealing very high damage. This build relies on the very high Damage over Time each of your hammers deal to nearby enemies thanks to Disintegration Passive. If you also decide to use  Hammer Vortex, they will follow you wherever you go, however, it greatly increases Hammer Throw's Mana cost which makes it much harder to sustain in the current state of the game. This build also provides insane defenses, thanks to Sentinel's Passives, high Health, high Block and Armor, and multiple defensive bonuses from Paladin's Holy Aura.