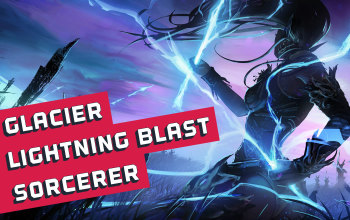 A Sorcerer build with a very high DPS, it uses Lightning Blast and Glacier combined with Spell-oriented buffs

The Sorcerer is a class known for its high Elemental Damage with Spells and some great Mana sustain tools. This build uses Glacier, which is great for dealing with a high number of enemies, and Lightning Blast - a Spell that can be customized in such a way to become one of the best single-target damage Skills. Glacier deals Cold Damage, while Lightning Blast is a Lightning Damage type of Spell, so it's important to keep both of these Elemental Damage stats high, but more important than the damage increase is the Critical Strike Chance and Multiplier. Use Teleport as a movement Skill, Flame Ward as a defensive tool, and Arcane Ascendence - a Spell that grants you some buffs and greatly increases your overall damage. It's one of the builds with the highest DPS and a popular one at that, there is a lot of room to upgrade your gear and Idols long after your build can be considered complete. It's also seen as one of the most beginner-friendly builds with simple mechanics and gameplay.

For the defenses, this build utilizes: