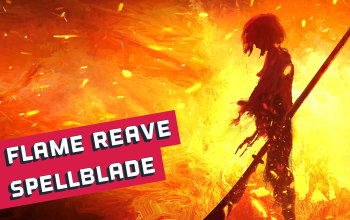 Spellblade is Last Epoch's version of a Battle Mage. He uses His arcane powers to imbue Weapons with Magic Energy to deal massive amounts of Elemental Damage. While most of His toolkit revolves around melee combat, some of His abilities have a surprisingly high range and can cover large areas with their effects. Flame Reave is one of such abilities. When combined with Firebrand and some support Skills, it becomes one of the most powerful AoE Skills in the game.

This build uses Firebrand to build up Stacks that are then used to deal massive amounts of Damage with Flame Reave (multiple Fire Damage bonuses and a guaranteed Crit ensure that nothing survives the combo... usually). Teleport, Flame Ward, and Enchant Weapon are used to achieve even higher Damage numbers from the combo (they also have defensive uses, more on that later in the build). Thanks to

Sunwreath, this Flame Reave Spellblade Build has a very good AoE coverage which speeds up clearing.

For the defenses, this build utilizes: