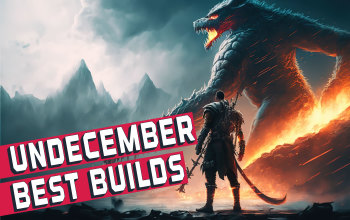 Undecember offers a never before seen level of freedom regarding character progression. It lets you freely combine Gear, Skills, and Zodiac (a talent system) to create unique and exciting Builds. As a result, there are hundreds, if not thousands, of viable combinations, but, while we're as excited to try them all out as anyone, we also understand that it might get quite overwhelming for newcomers. To help you find yourself in the ocean of Undecember Builds, we've prepared a series of build guides in which we break them down in detail. You'll find them down below, separated into three categories:

Important Note: If you want to find out more about how Undecember's Build system works exactly, check out the last section of this guide!

First of all, there are no Classes in Undecember which means that you are not funneled into any playstyle after you create a character. Instead, there are three main Attributes; Strength, Dexterity, and Intelligence that promote different types of Builds (of course, nothing stops you from experimenting and mixing Strength with Intelligence, for example). The game's Zodiac system will allow you to further specialize your character after you've chosen its main Attribute. Another benefit of Undecember's Class-less system is that you can choose any of the Skills that are available, even if they don't correspond too well with your chosen progression path.

As you can see, this system offers A LOT of possibilities but many of these possibilities are potential traps. To help you avoid these traps and improve your ability to create consistent Undecember Builds yourself, we'll break down the game's three main Archetypes: Strength Builds, Dexterity Builds, and Intellect Builds. But first, we'll explain the Gear, Runes, and the Zodiac System in a few words.