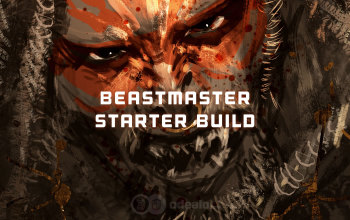 Beastmaster is one of the Master Classes for the Primalist which is heavily oriented on summoning multiple Companions to aid you in battle. This build uses a total of five companions - three Wolves, Sabretooth, and a Raptor. Sabretooth has very high damage and increased Crit. Chance, Wolves deal greatly increased damage after they Howl, and Raptor goes a Rampage against rare monsters and Bosses, shreds enemy armor, and reduces the cooldowns of your other Companion's abilities (which is mainly useful for the Wolves, to have their DPS boosted even further). Overall, this is a very simple and beginner-friendly build that utilizes Pets to do most of the work.

Since your Minions are the primary source of DPS, your main goal is to buff them with whatever means possible (and stay alive). Your only mean of boosting your Minions is the Frenzy Totem, which you are obviously going to use. We also recommend using Fury Leap, which increases the damage of your Minions significantly after you use it. Alternatively, you can use Swipe, which will instantly kill enemies below 14% Health and have a high chance of summoning Claw Totem, which scales off Minion damage as well. Using a Polearm and Serpent Strike is also an option. It allows you to shred enemy Armor and gain extra Dodge, but the weapon requirement may be troublesome.