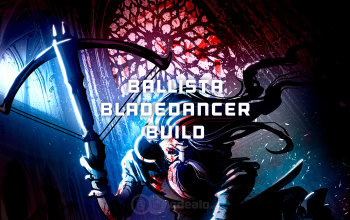 Bladedancer is all about bleeds, poisons, and devastating AoE damage, but not only that... She can also use Ballistae to do dirty work for her. At first glance, a minion  (Ballistae are considered minions) Bladedancer build might seem like a bad idea - there are no minion-related passives in the trees after all. However, Ballista's own upgrade tree has nodes that make the Character's own stats boost it. Thanks to this, a Bladedancer minion build is not only possible but also viable in the end-game and surprisingly effective at tearing everything apart with a hailstorm of Ballista bolts.

To make our "Shredding Sentry" Ballista Bladedancer build as effective as it can be, we have focussed on making our Ballistae as deadly as possible. To achieve this, we have chosen passives that directly boost their power - Critical Strike Chance, Critical Multipliers, Dexterity, Damage, etc. (after appropriate upgrades are selected in the Ballista's skill tree these stats also apply to your Ballistae, but at reduced effectiveness - except Dexterity which stacks with Ballista naturally). To ensure that mana will not be a problem, we have chosen Shadow Cascade, Shift, and Smoke Bomb which work together to restore Mana via the Fight in the Shadows upgrade for Shadow Cascade.