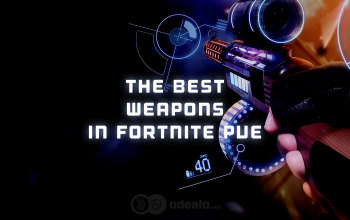 The Best Weapons in Fortnite: Save the World (PvE)

The Best Weapons in
Fortnite: Save the World(PvE)

Fortnite: Save the World lets you acquire weapons either by crafting or looting and features 6 rarity types: Legendary, Epic, Rare, Uncommon, Common and Handmade. Higher rarity weapons are generally better than their more common counterparts, which doesn't necessarily mean that weapons other than Legendaries are useless. Many of the lower rarity firearms and melee weapons can outclass Legendary ones in some aspects, but as you can probably imagine, this list will feature Legendaries mostly, 'cause they are the best overall. We have decided to feature three of the best weapons from each class (for now, we will expand this list in the future).

Assault Rifles are one of the most universal weapons available in the Fortnite: Save the World. They come in three fire-mode variants: Burst-fire, semi-automatic, and fully-automatic, so everyone will find an assault rifle that suits his playstyle.

Sniper Rifles are Fortnite's ultimate Long-Range weapons, best suited for taking down Husks from a safe distance. They have great stopping power and high damage per shot statistics but lack in the rate of fire department.

Pistols play a secondary role in most of the shooter games. They are either underpowered or inaccurate which makes them just not useful. This is not the case in Fortnite: Save the World, however! Thanks to Class-specific buffs Pistols are a must have weapons for many players.

Shotguns are the ultimate close-range combat firearms in the Fortnite: Save the World, and should not be overlooked as they have the ability to save you from even the direst close quarters combat situations.

Explosive weapons deal massive amounts of damage to multiple enemies at a time and are very effective against Husk swarms because of that. Their massive firepower comes at a price of very low durability, however.

Melee weapons are not very popular among Fortnite: Save the World players (except Ninja class), and get overlooked most often, which does not change the fact that they can deal massive amounts of damage in close quarters combat situations. Please note that there are many melee weapon classes in the game, but we have decided to look at them collectively.

Pictures used in this article are the intellectual property of the Epic Games.