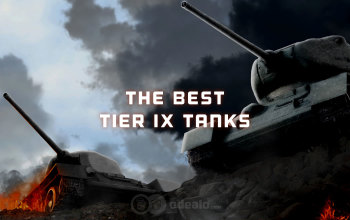 The Best Tier IX Tanks in WoT - an in-depth comparison

If you want to check out the best WoT Tier for Tier vehicles with our in-depth selection method explanation and analysis, go here.

This article will feature Five of the best Tier IX World of Tanks vehicles. I have based my selections on a global win rating charts; feel free to check previous articles in this series for an in-depth explanation. For those  not interested in a lengthy explanation, here is a tl/dr version: Winning should be your main goal in a WoT team battle, and the win rating of an average gamer should be higher in a vehicle that is easy-to-play, well-rounded, and forgiving, because an average gamer is, well... "average". So this list will feature vehicles that are the best in hands of a casual WoT community member, and not necessarily the ones with the highest potential that could be exploited only by fabled Unicorns. And of course, this list might differ from your opinion; that is ok because it is based on raw statistics, and as we know opinions and statistics don't go too well with each other usually.

Pictures used in this article are the intellectual property of Wargaming Group Limited.