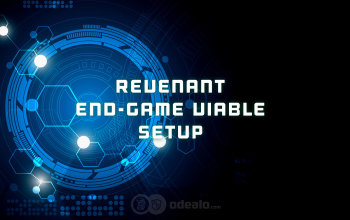 Revenant is a very complex Frame which offers a lot of synergies between its Abilities offering a very enjoyable playstyle. This build is based on maximizing Danse Macabre sustainability by reducing it's Energy Cost to a minimum and increasing Damage via Ability Strength. Revenant also offers very solid defenses thanks to Mesmer Skin's ability and allows us to skip Health/Shield Mods entirely in this build. This is a very flexible build with insane AoE, and if facing plenty of enemies, you can basically use the Ultimate Ability indefinitely. We are also using Reave for mobility and some extra healing, while Enthrall is completely optional.

Our build revolves around maximizing Ability Strength and Efficiency. Skill Duration is basically irrelevant because it doesn't have much effect on our two core abilities - Mesmer Skin and Danse Macabre. We increase the maximum possible duration of Danse Macabre by greatly reducing its Energy Cost, so if you are facing multiple enemies you should be able to sustain it indefinitely. The most important Mod listed below is Natural Talent, which grants Revenant much smoother gameplay. It makes Enthrall somewhat viable, increases the casting speed of Mesmer Skin which will save your life plenty of times, and greatly increases the effectiveness of Danse Macabre.