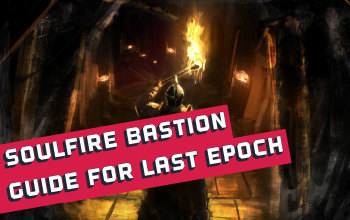 To The Soulfire Bastion and The Soul Gambler

Soulfire Bastion, alongside the Lightless Arbor and the Temporal Sanctum, is one of the three currently available Last Epoch Dungeons. Unlike the other two, however, it offers you a self-contained mechanic at the end which makes it very rewarding for newbies, casual players, and experienced adventurers alike*! The Soul Gambler who awaits you at its end will let you try your luck, and all he'll want in return are Soul Embers that can be acquired within the dungeon itself.

This Guide will introduce you to the Soulfire Bastion Dungeon. It will go over all of its unique mechanics, tell you how to acquire the dungeon Keys efficiently, break down the fight against Fire Lich Cremorus, and shine some light on the fabled Soul Gambler.