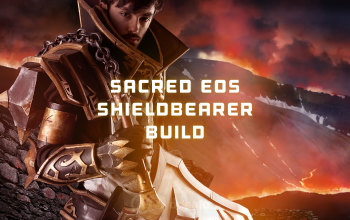 As you know, it is your weapon that determines what Spells and Abilities you can use. This means that you can't just throw in Sacred skills into your standard Melee Build... but you actually can. There is a very interesting Unique Shield, called Quintet of Sundowns, that "allows the bearer to cast Sacred Spells", which opens up many very interesting build possibilities; with it, you can become a true Warrior of Light/Holy Paladin who will purge the world and burn demons and heretics with holy flames (on top of that, having a shield that basically counts as a Staff/Catalyst is very, very convenient because shield can block enemy attacks). If becoming a Warrior of Light is your thing, this build will suit you well.

Important note: This is a beta version of our Sacred Shieldbearer Eos Build that we have just recently started working on. It breezes through the campaign and its kill speeds are among the highest we have seen to date. As mentioned earlier, we have just started this "project" so we are still far away from determining the perfect mix of active and passive abilities (it is possible that we will swap some of them around in the foreseeable future). Despite being in the early stages of development, the build shows great promise and performs at a very high level. However, it is possible that combos/mechanics that the build uses will get tuned down in future patches which will make it less outstanding. As it stands, this is one of the most dynamic and engaging builds you can currently run.

This build offers a very dynamic and challenging playstyle that forces you to pay attention to your positioning if you want to maximize its effectiveness. It offers one of the most mobile Melee ability setups thanks to the fact that Bulwark of Dawn and Bleeding Edge can be Modified in a way that allows them to move together with the caster. This means that, with this build, you don't have to stop; just running around, with these skills active, makes your enemies burn and bleed. As for the build's other active abilities: Flight of Gaavanir, the build's main DPS ability, is what makes it feel engaging - it allows you to throw and then recall hammers that damage everything on their path; the recall part makes positioning important (you want your enemies to always be between you and your thrown hammers so that recall causes the hammers to damage enemies). Wings of Ishmir allow you to quickly engage and obliterate groups of enemies and also serve as an emergency getaway option. Despite being focused on relentless offense, the build does not forgo defense (mainly because the defense becomes offense with this build's setup); the Juggernaut is its main defensive ability that, thanks to some over tuning, also works wonders during boss fights - it seems that damage reflection is slightly too good at the moment.

For this DPS build you want to focus Ferocity for increased Attack and Spell Critical Strike chance, and the highest DPS bonus. The higher your crit chances are the better. Thanks to the build's Active Ability setup, you can leave Toughness and Agility at base levels (Abilities, like Juggernaut and Bulwark of Dawn, more than cover our defenses with this build) - bonuses gained from gear will give you enough of these stats. When it comes to Wisdom, you can allocate some points into it, but only if you find it necessary. In reality, allocating every point into Ferocity will work.

Below you will find the recommended Passives for our Sacred Shieldbearer Eos build. It primarily utilizes Ferocity Classes, but also ventures into the Warlock Archetype to increase the Rage cap, which synergizes with the Warmonger's Manic Slaughter. Build's Passives are allocated in a way that maximizes Damage, Crit Chance, and Block, but they also provide Life Leech that greatly increases build's survivability (high DPS combined with Life Leech is simply overpowered). 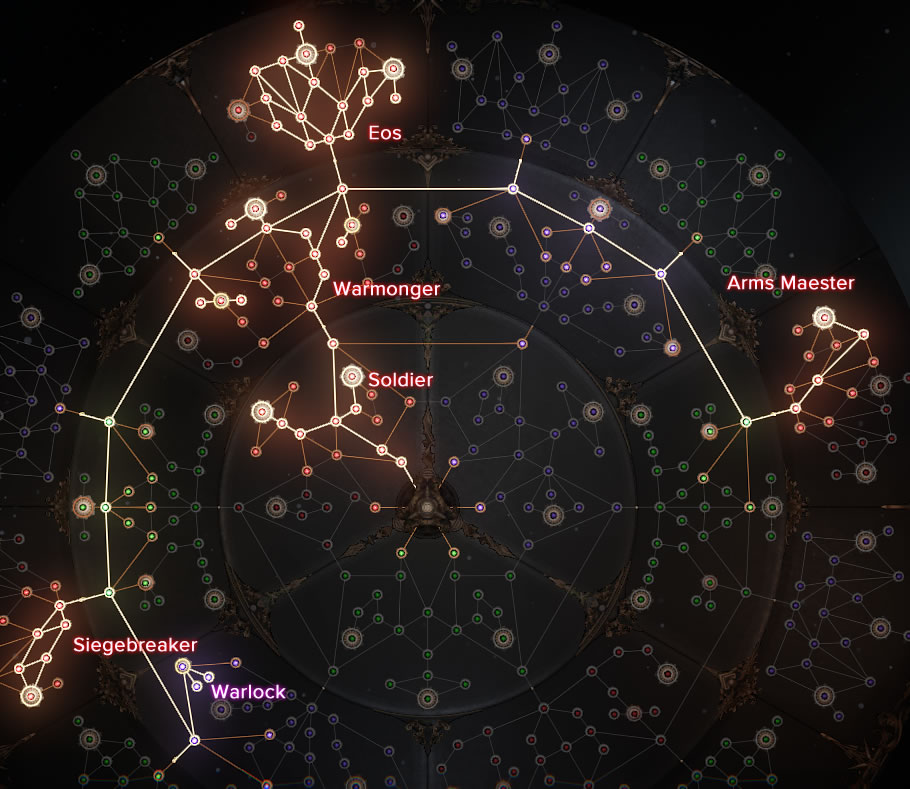 Note: This build is based on a level 8 Unique Shield "Quintet of Sundowns" that allows the bearer to cast Sacred Spells (the shield basically counts as a Staff or a Catalyst). Please be aware that the build will not work as intended without this item!