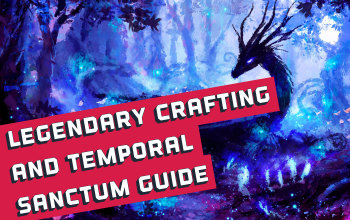 Complete Guide on how to create Legendary Items in Last Epoch

Legendary Items are the very peak of Last Epoch Itemization. If you're looking for the most powerful gear in the game, they are it. Unlike in most other CRPG games, however, you can't simply spend hours mindlessly farming to eventually get them; it's a bit more complicated (and enjoyable) than that! To create a Legendary, you'll have to venture into an End-Game Dungeon called Temporal Sanctum, defeat a challenging boss at the end of it, and use the Eternity Cache to forge the Legendary of your dreams yourself.

This guide will go over the process of creating Last Epoch Legendary Items. It will shine some light on the intricacies of the Legendary Crafting System and explain, in detail,  how it works. It will also break down the Chronomancer Julra encounter from the Temporal Sanctum, to help you get to the Eternity Cache easier.

Creating a Legendary in Last Epoch