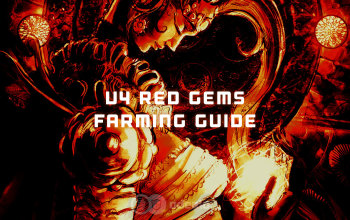 How to Farm V4 Red Gems - Guide on V4 Currency

V4 progression is all about Combat Power. It determines how powerful your character is and allows you to grind more quickly and more efficiently. It is CP that gauges the power of your tune compared to other players' characters. You can increase it by simply playing the game - gear, level, enhancements, and skill levels all affect it, but to reach really high Combat Power levels you will need a hefty amount of Red Gems - v4's premium currency.

Earning Red Gems free-2-play is quite tricky and many players have difficulty doing it which, in turn, makes them fall behind the competition when it comes to CP. We dedicate this Guide to these players and anyone else who wants to play v4 without spending real money in its in-game store. It should give you a general idea of how to grind Red Gems f2p and how to spend them as efficiently as possible to increase your character's Combat Power.

Red Gems are vital to your v4 character's development. Without them, your progress will be very slow and your character will never be on par with other players' characters. The main way of getting v4 Red Gems is through the in-game store, but that requires a real money investment and is regarded as pay-to-win. Luckily, there are some other ways. Currently, all of them revolve around farming and selling stuff, for Red Gems, via the Trading Post. The prices of most assets are quite inflated right now, however, so if you want to make a good profit, you will have to farm for specific things. Below, we present you with a shortlist of items that are worth farming*.

*Please remember that prices are fluctuating and they tend to decrease as Trading Post gets inflated with new assets. Moreover, methods that are great today might turn out to be outdated tomorrow, it all depends on the game's current economic situation (this includes player count, number of new players who need specific gear, number of Red Gems that are already in the system, number of assets posted on the Trading Post, and so on).

How to Get the Most Value Out of Your Red Gems?

Red Gems are the main source of your character's power in v4. The way in which you invest them will directly reflect in the strength of your tune. Spending them optimally is extremely important, especially if you are a f2p player and don't want to throw your wallet at the game to gain more power. Below, we present you some of the more worthwhile Red Gem investments you can make to strengthen your character or expand your vanity items assortment if you are a collector.

Pictures used in this article are the intellectual property of  NEXON KOREA Corp. & NAT GAMES Corp.