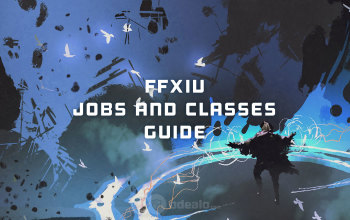 Updated for the Shadowbringers Expansion

A class system often becomes a foundation upon which the success of an MMORPG is built. In the standard systems, classes are divided into three main categories (Tanks, Healers, and Damage Dealers), players get to choose a class that they would like to play as and are stuck with their choice unless they want to make an Alt. The less common, but "classic" (in a sense that it was utilized in some of the oldest games in the genre and then forgotten just to be reintroduced) solution forgoes the idea of classes altogether and lets players become whoever they want. The second-mentioned approach is typical to Sandbox MMOs (OSRS is a great example), while the first works the best in Themepark games, like WoW or Guildwars.

Square Enix, developers of the Final Fantasy XIV have chosen an interesting middle ground by deciding to implement Classes and Jobs iconic to the Final Fantasy series and giving players an option to play as any of them on every Character. This means that a single Character can play as every single one of the current 10 Base Classes and extend them to all 18 Jobs as long as he meets the requirements, completes associated Quests and activates an appropriate Soul Crystal (this also eliminates the need for Alts, as a single character can learn and master all roles, potentially).

This Guide aims to introduce you to all 18 of the FFXIV’s Jobs and briefly describe their main features. It will highlight flavors, strong points and main gameplay features of each of them while also trying to point out the weaknesses in order to create a clear comparison tool for new and experienced players alike. It will also be focused on changes implemented in the Shadowbringers expansion.

We have just recently published a DPS Tier List based on the data in Patch 5.35 so if you are still trying to figure out which class is worth playing currently, you may check the article right here.

Pictures used in this article are the intellectual property of Square Enix Co., Ltd.