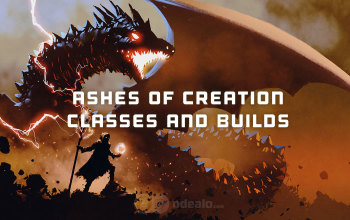 Ashes of Creation Builds and Classes Guide
The best builds for all the classes coming soon after the Game's Release!

Many MMORPGs struggle to deliver diverse gameplay experience to their player base. Despite many available Specializations and Subclasses, a lot of the time, Players get stuck playing with a few viable builds, because the rest of them is way below the power curve. Creating a well-balanced, unique, distinct, and yet robust Class System is quite a task and many companies struggle to deliver in this field. However, developers of the Ashes of Creation seem to have come up with the system that may prove to be one of the best Class systems to date. In this Guide, we will introduce you to all of the Archetypes and Classes available in Ashes of Creation. Also, we'll do our best to explain how the AoC's Class System works, and what exactly does it offer.

*Secondary Archetype does not provide you with any additional Spells or Abilities from that Archetype (this means that combining a Tank with a Cleric will not give you access to healing spells). Instead, it provides you with some Archetype-specific utility effects and alters your existing spells and abilities, by adding some bonus effects to them.

There are 8 Archetypes, that can be selected at the start of your journey through the world of Verra. The same 8 Archetypes become available as secondary Archetypes later in the game (selecting the same Archetype for a second time is possible). This means that there is a total of 64 Classes in the Ashes of Creation, and you can freely change between 8 of them (because, as we mentioned before, Primary Archetype is permanent). All available Classes will differ in playstyle, flavor, mechanics, and backstories.

Below, we present you with all currently available information about Ashes of Creation Archetypes and Classes.

Important Note: Some of the information may be missing and all of it is subject to change, as the Game is still in development, and a lot of the Class and Archetype-related knowledge has not been released yet. We will keep all information featured in this Guide up-to-date, and all newly released clues will be added immediately.

Ashes of Creation Archetypes and Classes