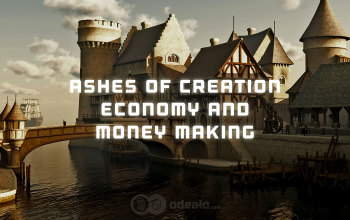 There are a lot of problems associated with the creation of a balanced, fair, and stable in-game Economy System. You might think, that all you need to do is replicate systems present in the real world... this line of thinking is wrong at its very base sadly, and the reason for this is rather simple:

Players want to get rewarded for doing stuff in the game. This forces Game Developers to give them gold and/or items for completing quests, killing monsters, running through dungeons, and gathering materials. This is where the problem lays. Every time a Player gets rewarded for completing an in-game activity, the game basically creates money and hands it to him. This affects the in-game Economy exactly the same as printing money would affect the real-world Economic System. Inflation rises, gold loses value rapidly, and soon being an in-game millionaire means absolutely nothing, because a single piece of low-level gear costs billions of gold coins.

To fight this problem various money sinks are introduced to the game. These sinks are the opposite of in-game rewards - they are designed to take away the gold from the system. Of course, they create a balance problem, because Players get rather upset when the game forces them to spend most of their hard-earned money on stuff like repairs, fast travel, skills, or "special" and very expensive items that are required for crafting for example.

Now, that we have drawn the raw outlines of some MMORPG Economy aspects it is time to take a look at how the developers of the Ashes of Creation have approached this very complicated problem. In this Guide, we will cover the wide-understood Economy present in AoC, with all its important aspects, including The Artisan System (which contains Gathering, Processing, and Crafting), Trading, Markets, Caravans, and of course various in-game Money Sinks. We hope that this Guide will help you understand the important aspects of the AOC's Economy, and give you a head start in the race for becoming very rich, and very powerful figure in the Economic Node's government.

It turns out that too much money is the problem and not the solution, in MMORPGs at least...

Important Note: Please remember that Ashes of Creation is still in the development, and all information featured in this Guide is subject to change. We will do our best to keep this Guide up to date with all the information that becomes available in the future. Also, some of the information contained here is based on our interpretation of the currently available info, so keep that in mind.

Before we go into detail, there are some Ashes of Creation Economy basics that we want to cover (we will go over them in much more detail in the corresponding sections). These will give you a raw picture of the AoC Economic System's shape and features:

Important Note: Many of these features are directly related to the Ashes of Creation's Node System. If you do not know how the Node System works yet, we encourage you to check it out through our detailed AoC Nodes Guide, HERE.

With all the basics covered, it is time to take a closer look at various AoC's Economic System aspects in much more detail.

Every single Marketplace in the Ashes of Creation is unique and has its own micro-economy associated with it. This means that players are sometimes forced to travel very long distances if they want to find their desired Items or Crafting Materials. The fact that different Items are in short supply in different Marketplaces creates a lot of room for making Gold out of transporting various resources.

The Marketplace Building is unlocked when a Node advances to the Stage 3 (Village) and has to be built by Node's Governing Body. Once the Marketplace is finished, Players are able to freely conduct Trade and rent special "Player Stalls" that allow them to provide enchanting and repair services, and sell their hard-earned loot to other interested Players. Marketplace's current offers can be checked in its User Interface, but the Interface doesn't let Players purchase items directly from the UI level, instead, it points them to the location of the Player Stall that has their desired item in stock.

Note: Players are immune, and cannot be attacked when they are occupying their Stall.

Note: Economic Metropolises will naturally become AoC's main Trading hubs, and Players from all around the Server will travel to them in order to conduct Trade, equip themselves for dangerous adventures, or sell their loot quickly.

The Game World of Ashes of Creation is vast. Traveling through it takes a lot of time, and may get quite dangerous. The Fast Travel system is rather limited (on purpose, as it makes the World feel even bigger and immersive), and reserved only for Scientific Nodes and their Zones of Influence. To further increase the meaning of each of the high Stage Nodes, their specializations, and locally available resources, Players have limited Capacity and are not able to transfer goods between Nodes quickly. This is where the Caravan System comes in...

The Caravan System allows players to transport Goods between Nodes in large quantities. The transportation comes at a risk, however, as a Node Caravan is permanently flagged as a PvP Zone, and hostile Players may attempt to take it over, along with a portion of the resources that are being transported. This will force Players, who want to make a profit out of resource transportation, to group up, and protect their goods against bandit attacks. There will be two main Caravan Types:

Ashes of Creation features elaborate Gathering, Processing, and Crafting system. Players are able to focus exclusively on Artisan work, skip Combat-related content completely, and still impact the Game world in a visible way. The Artisan System forces players to chose the profession that they want to Master, as Mastering multiple professions is not be possible. Of course, some may choose to become Jacks of all Trades, but they will not be able to Master any of their multiple trades.

The combination of these Artisan Classes creates a player-to-player item supply chain (Master Gatherers are not able to utilize their collected raw materials, so they are forced to sell them to Master Crafters, and so on), that reinforces in-game economy system even further.

Note: Artisan Professions do not increase Player Statistics in any way. This means that the Profession choice depends on a Player's preference, and not on the Stats that he desires.

Now, let us take a look at each of the three main Artisan System aspects, Gathering, Processing, and Crafting: