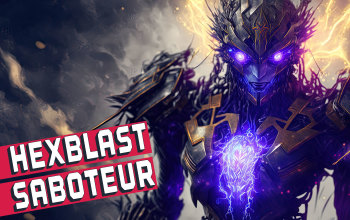 Hexblast is a one-of-a-kind Spell in the Path of Exile that has many unique interactions. It is strictly associated with the Hexes, hence the name. It deals very high Damage on its own, but if it's targeted against Hexed enemies, it will deal even more damage, and with much better AoE. Usually, Elemental Skills rely on lowering foe's Resistances through various ways, such as Hexes or Exposure effects, while Chaos Skills are mostly limited to Wither debuff and a single Despair Curse. Hexblast however, can take the best of the two worlds, as it will choose the lowest Resistance of the struck enemy, while also being affected by the Damage amplification from Wither. But that's not all! It can also apply Ignite, Freeze, and Shock with its Chaos Damage. Keep in mind that just because a Skill can inflict an Elemental Ailment, it doesn't necessarily mean it will do so, as you also need a Chance to apply a specific Ailment. Fortunately, Critical Strikes will always apply them, so you don't need to worry about it. Hexblast needs to consume a Hex to deal increased Damage, so you will need a source of Curse on Hit to constantly reapply Hex for the next Hit. Profane Proxy and its Hex Aura are used to ensure even the first Hit is amplified.

However, it's not a perfect Skill and it also has some flaws. One of the biggest problems is its Cast Time, as it's the slowest Spell in the entire game. It also has a very low base Critical Strike Chance. Fortunately, there are a few countermeasures you can take to make the most of this Skill. One such method is to ignore entirely the Cast Time and use Mines instead. Mine Throwing Speed is unified for all Mines, and there are plenty of ways to efficiently improve it to very high values. Playing as a Miner has many advantages, such as the ability to preload your Damage in Boss encounters, generally strong Damage scaling opportunities, or even auto-targeting. It is a vastly different gameplay style than regular Spell Casting, and we strongly encourage you to try it out at least once!
To solve the second problem of this Skill we simply use the Sandstorm Visage Unique Helmet. It's a new addition to the game, commonly available from the final Boss of the Forbidden Sanctum. It sets your Spells Critical Strike Chance to the base Critical Chance of your Weapon, which in the case of Wands, is usually very high.

The maximum Life pool achievable is quite low, but it doesn't mean it's a squishy Build. Thanks to the combination of Grace, Determination, and the Skin of the Lords, you will be very safe during regular encounters. As a Saboteur, you will have access to a very powerful Blind Aura, which also lowers all the Damage dealt by Blinded enemies. On top of that, you will also be constantly Chilling and Freezing your enemies, making them very slow or even unable to attack you.

At its core, it is a quite cheap and accessible Build, it uses a lot of Unique Items and some Rares to cap Elemental Resistances and Attribute Requirements. It is however a bit more than a League starter, and diving deep into min-max territory can be expensive.

Mines are often referred to being a 2 button gameplay, but it's not really the case. By binding Detonate Mines to your Left Click, you will automatically activate them every time you move, making it a very smooth gameplay style. All you have to do is quickly throw a few Mines in the general direction of your opponent, and auto-targeting will do the rest! To boost your Damage against powerful bosses, you will need to cast a Wither Totem every so often. Curses in this Setup are actually required to be automated, so you don't have to worry about them at all!

Leveling as a Miner is a very smooth experience, but you will need 2 Unique Rings to use the Hexblast Setup. You can also use basically any other Spell, as the scaling of the Mines is very generic. Mine Throw Speed is a bit slow at first, but don't worry, it gets much better as you progress. You can do a few small adjustments to the Passive Tree and respec them later with the Points you obtain from doing Quests, as the synergy with Critical Strikes and Charges is quite bad without specific end-game Items.

The Build uses almost exclusively Unique Items. Most of them are rather cheap and easy to access and have a pretty simple way to an upgrade - via specific corrupted Implicit, such as additional Power Charge on your Helmet or Elemental Resistances on your Belt.  But don't stress over that too much, baseline versions are more than enough to achieve excellent results. In the end, you will wear only 2 Rare Items and a bunch of Rare Jewels. This puts pretty heavy stress on your Resistances and Attributes - you will need a lot of them there. It's important to get Rare Gloves with Exposure on Hit, and pair it with relevant Elemental Curse to maximalize Resistance Reduction on enemies.