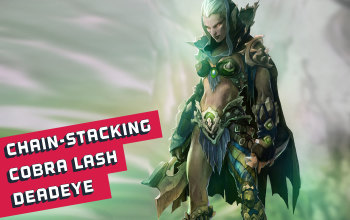 This Ranger build is based on a very niche mechanics that is Chain. Chaining is a property of a Projectile that allows it to bounce after hitting an opponent and let it automatically target the nearest one after that. There are ways to scale up your damage with the remaining Chain, meaning that the first enemy to be hit with a projectile that Chains multiple times will receive increased damage. These are "Follow-Through" Notables and the Quality of a Divergent Cobra Lash. With 6 of these Notables and Gem Quality at 50%, the damage will get increased by around 2000%. In general, the Passive skill Tree provides increased damage, the Gem setup grants more damage, and your gear provides you with flat, numerical damage. Cobra Lash is the only viable skill for this build as it has built-in 6 Chains at Gem Level 25, resulting in 11 Chains as the build is finished.

For an Asendacy pick Deadeye. Ricochet grants you an extra Chain and Far Shot gives you a suitably named Far Shot for more Damage against distant foes. Gathering Winds with Wind Ward are one of the few defensive perks thanks to the Gale Force and Tailwind. Your other defences are 4 to 5k of Maximum Life, a lot of Evasion Rating, Armour, Block Chance, and the ranged nature of the build. With 45 points spent on Cluster Jewels, you don't have many points left to invest in Critical Strikes, luckily with a moderate investment into Accuracy Rating you can pick Precise Technique for 40% more Attack Damage. Cobra Lash converts 60% of its Physical Damage into Chaos Damage. With Void Manipulation it's better to convert all of your Damage into Chaos - it can be done with Chaos Mastery, or Forbidden Flesh and Flame granting Nature's Reprisal.

Use Cobra Lash is a great tool for clear speed due to the multiple Chains, but here it's also great against single targets, as long as they're one of the first targets of your Attacks. You want to keep a distance off of your enemies, not only because you have a Far Shot, but because the character is quite squishy - the Minions from Herald of Purity should keep your opponents busy. For a boss fights plant your Totems that cast Wither for increased Chaos Damage, and cast the Tornado linked to Chance to Poison Support. You're using Vile Toxins Support so you want your enemy to have at least 8 Poisons, even if it's not the type of damage you're specialized in. Your Auras are Grace, Determination, Defiance Banner, and Herald of Purity. If you lack Accuracy, add Precision. Your Guard Spell is an Immortal Call linked to a low-level Cast when Damage Taken. Additional Spells to use are Phase Run and Blood Rage. For a Curse use Despair - it adds extra Chaos Damage to your Attacks.

Cobra Lash is a great leveling Skill, and it's available since level 1. At first, build a general Attack Damage character dealing a combined Poison and Attack Damage, and at level 60, when you'll be able to socket your first Large Cluster Jewel, do so and start stacking the Follow-Through Notables. We recommend leveling with Tabula Rasa, there are a lot of great Support Gems you can use, bet keep in mind that you might run out of Mana without Clarity. Update your Claw frequently for one with a higher Physical or Chaos Damage, it will be progressively more important as you level up. Precise Technique is a tricky Keystone as you can't easily check your Accuracy without importing your character into PoB, but if you're dedicated to level efficiently you can pick it early on.

Minor God: Soul of Shakari: You cannot be Poisoned while there are at least 3 Poisons on you, 50% less Duration of Poisons on You

Your goal here is to accumulate enough Accuracy Rating to activate Precise Technique Keystone - you have to have more Accuracy Rating than Maximum Life. The most important part when it comes to damage is the Flat Physical and Chaos Damage, it can be found in great quantity on your Rare Weapon, and some of it is common on Rings, Shield, and Murderous Abyss Jewels. Attack Speed is also important. We've decided not to pursue Critical Strikes mods, there is simply not enough space for it as it requires a lot of investment, which the build cannot afford. All the remaining Skill Points which are not spent on Cluster Jewels will be dedicated for defenses, not for more damage. The key Unique Items are Ashes of the Stars, Replica Voidwalker, and some cheap Flasks. the Attribute most searched for will be Strength - 155 is needed for Determination. The build also has a hidden potential that is only available under certain circumstances - a Replica Eternity Shroud with Elder-influenced items. It's a great way to gain more Damage as the build sources its Damage from a Physical to Chaos conversion.